We Need To Talk About Environmental Racism

Take a deep breath – can you do this without coughing?

Take a look at your glass of water – what color is it? Does it smell?

Take a look outside – what kind of industries are providing your town jobs? Are they oil refineries, treatment plants, or chemical plants?

Take a look at your family – does chronic illness such as cancer, asthma, diabetes run rampant?

Take another look at your family – how many of them are people of color?

If you can answer all of these questions with ‘no’ or almost ‘none’, then you are part of a small percentage of the global population that does not bear the burden of environmental racism. For the rest of us, we are part of a startling environmental statistic that is once again coming to light under the guise of COVID-19.

However it’s not all doom and gloom. Many people around the world are making efforts to combat environmental racism with environmental justice initiatives and bringing awareness to the issue. Let’s talk about how we can fight environmental racism using facts, awareness, advocacy, media pressure, and public activism. In 2020, these issues are more important than ever.

What is Environmental Racism?

Environmental racism is a form of systemic racism, and has been a topic of discussion since the 1960s. It was officially coined by civil rights leader Benjamin Chavis in 1982 as “the racial discrimination in environmental policy-making, the enforcement of regulations and laws, the deliberate targeting of communities of colour for toxic waste facilities, the official sanctioning of the life-threatening presence of poisons and pollutants in our communities, and the history of excluding people of colour from leadership of the ecology movements”.

An example of this is people in low-income communities of color being forced to live near a toxic waste site or a toxic waste site being moved to an economically disadvantaged community. People in these communities typically do not have the financial means to move and therefore are “sacrificed” for the sake of capitalism. This sacrifice often comes in the form of life altering chronic health illnesses due to proximity to mines, landfills, power stations, etc.

As a result, these communities are subjected to environmental racism in the form of:

Though environmental racism can be found in many low-income communities, race is almost always the most reliable indicator of proximity to pollution.

In 2007, a study by Dr. Robert Bullard found “race to be more important than socioeconomic status in predicting the location of the nation’s commercial hazardous waste facilities”.

Through discriminatory housing policies, redlining and unfair zoning practices, we have instituted an economic and environmental apartheid. Not only are people of color forced into these areas, but land is worth less simply because minorities live there. Polluting industries, driven by economic returns, then buy up the cheap land by getting buy-in from locals that their plant would help bolster the economy with new jobs. At a higher level, these polluting industries know the minority groups lack the economic and political clout to make their voices heard and deny their facilities. In some instances, local governments support polluting industries over their constituents thereby exacerbating negative health impacts.

As a result, economically disadvantaged communities of color are subjected to “sacrifice zones”—areas where citizens are riddled with chronic medical conditions such as cancer, liver, kidney or heart disease, and asthma due to polluting industries. More often than not, these areas are also the most medically underserved communities too.

The statistics below are proof of this: 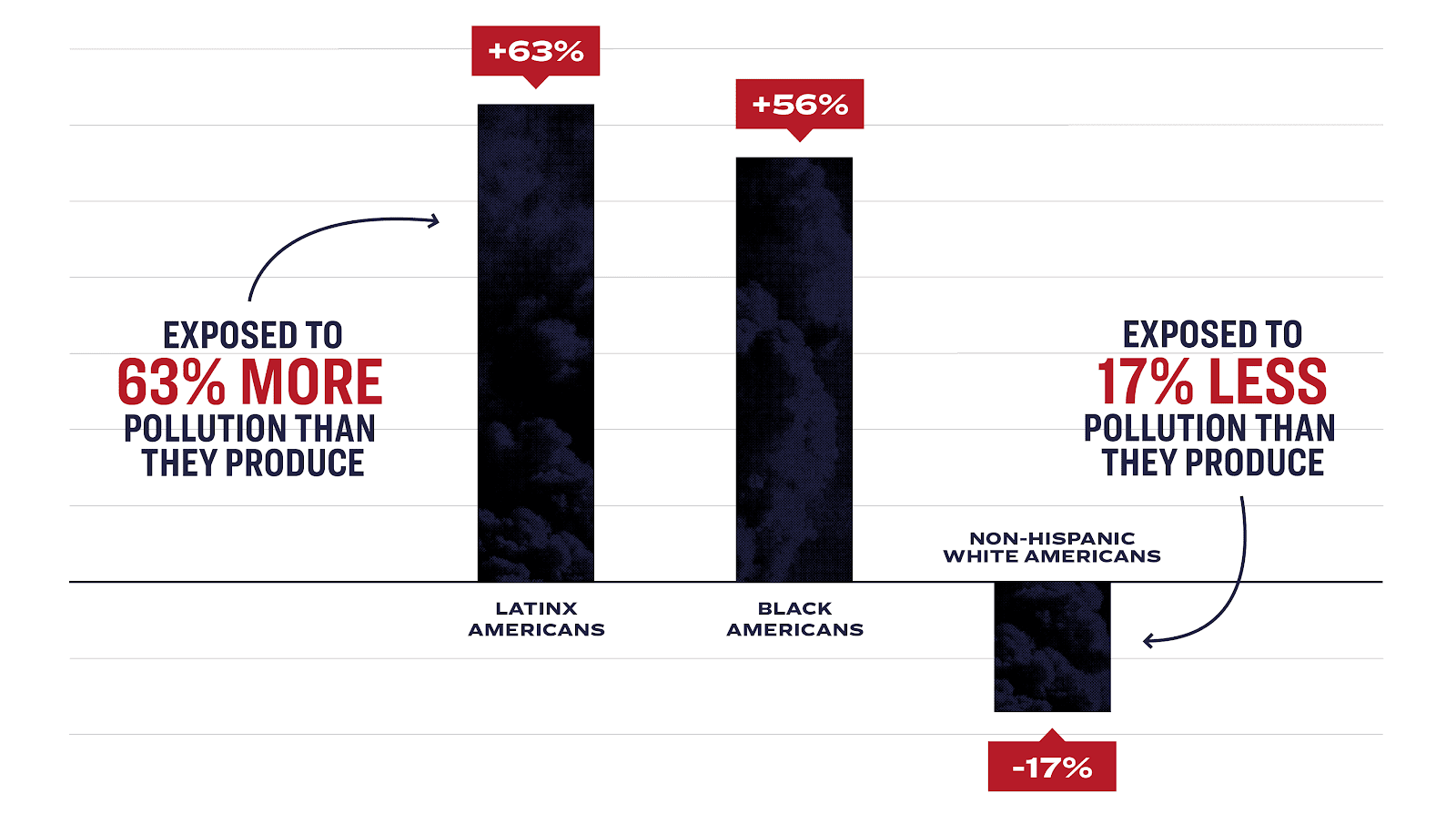 “Sacrifice zones” are areas that have been permanently impaired by environmental damage or economic disinvestment, often through locally unwanted land use. These sacrifice zones are some of the most polluted and poisoned places around the world and disproportionately affect low-income and minority communities.

Most of these sacrifice zones are unseen or unheard of because the people who live there have little opportunity to make their voices heard to enact change under the crushing weight of polluting industries. These zones are located around the globe and come in many different shapes and sizes. The first step to addressing these environmental calamities is to acknowledge them. So let’s talk about them now.

In 2014 the city of Flint changed its water source to the Flint River, but they failed to clean the new source of water before it was distributed to 100,000 people in low-income communities of color. For 8 months, residents complained that their water smelled and was brown out of the tap. Turns out, the untreated water had egregious levels of lead. It is estimated that 6,000 – 12,000 children drank contaminated tap water not to mention the 12 citizens that passed away from Legionnaires’ disease.

Today, change is slow in Flint. The city has inspected more than 25,000 service lines and has replaced 85 percent of the pipes. However, construction has slowed due to COVID-19. Moreover, the psychological damage of having to drink or bathe your children from bottled water for 6 years out of fear of contaminated tap water will linger in the community for years.

While work is being done to address the physical sources of pollution, holding public officials accountable for one of the worst man-made disasters in American history is still a battle to be won. To support local grassroot organizations working to provide Flint and its communities with clean water – consider these organizations.

Cancer Alley is an 85-mile stretch of land along the Mississippi River between New Orleans and Baton Rouge. It is lined with over 150 oil refineries and petrochemical plants from major energy corporations such as Exxon Mobile, Koch, and Shell. According to a recent study, local residents are 50 times as likely to get cancer than the average American. Cancer Alley is at the frontline of environmental racism and is without question one of the deadliest areas to live in America.

Through public activism, community engagement, and environmental data collection, improvements are starting to be made. A coalition of organizations are coming together to publicly march against polluting industries. Local leaders are attending public meeting to stop discriminatory rezoning that would result in more polluting factories to be built – such as a $9.4 billion petrochemical complex. Environmental data collection around air quality, water quality, and soil quality is quantifiably proving that these industries have been exceeding EPA polluting guidelines since 2009.

Combine all three forms of environmental justice together and now the communities of Cancer Alley are starting to see unlikely victories – such as helping force the Wanhua Chemical Group to abandon its plans for a $1.85 billion petrochemical plant in St James.

Native American communities have historically been marginalized and stripped of their economic resources but in 2017, they said ‘enough is enough’. The infamous Dakota Access Pipeline is a 1,172 mile-long underground oil pipeline that would send crude oil through the Standing Rock Indian Reservation. The pipeline poses a threat to the Standing Rock Indian Reservation’s water supply and would disrupt culturally significant burial grounds.

In defiance, the Standing Rock tribe and their supporters stood up to the oil company, Bakken Shale Oil, in the form of public activism. Combined with media pressure, this story caught the nation’s attention and became a topic during the 2016 presidential election. Fast forward to 2020, and a judge has ordered the pipeline be emptied and demanded the Army Corps of Engineers produce an environmental review.

Through globalization, sacrifice zones are reaching all ends of the world. For example, mass shipments of used American-made batteries are sent to Mexico due to lower lead-emission standards. The batteries are then illegally stripped and dumped from plants operated by American, European, and Japanese companies. As a result, local workers are exposed to toxic levels of lead. Now, local communities are seeing a spike in anencephaly – where babies are born without brains.

Activism is slow to occur in Juarez because Mexican factory workers are often too poor to unionize or plan when their loved ones develop chronic illnesses due to lead dust. However, watchdog nonprofits, such as Fronteras Comunes, are using environmental data to prove the staggering lead levels and how they exceed all countries guidelines. Through effective reporting and media spotlight, Mexican authorities are starting to seize illegal battery operations. Smelting companies in the US are demanding the bar be raised for companies in Mexico, and the Commission for Environmental Cooperation is helping to reduce pollution for battery recycling in the US, Canada, and Mexico.

Environmental justice is defined as the fair treatment and meaningful involvement of all people regardless of race, color, national origin, or income with respect to the development, implementation, and enforcement of environmental laws, regulations, and policies.

Simply said, you should not have to be subjected to a “sacrifice zone” due to your race or economic means. In order to ensure environmental justice reaches our most devastated areas, we have to lean on policymakers to invest in our communities. We also have to prepare our homes for disasters – be it man-made such such as an oil spill, natural disasters in the form of a hurricane, or biological disaster in the form of COVID-19.

“One thing that Covid-19 has done, it has made a lot of populations we made invisible, visible.”

Though COVID-19 has devastated many aspects of people’s lives, it has also shed light onto environmental racism and sacrifice zones. These sacrifice communities are susceptible to poor air quality, which puts them at higher risk of COVID-19 infections. By tracking COVID hotspots, we are seeing the need to better invest in our nursing homes, meat packing industries, and communities impacted by environmental racism.

The changes that need to happen start by improving people’s quality of life by reducing pollution levels and removing or discarding the polluting industries around them. We also need to invest in public health awareness and preparedness. Through environmental justice movements, we are seeing networks of advocacy groups, communities, scientists, and academics taking to the streets to apply media pressure in the form of public activism. This “bottom-up” approach fueled by grassroot movements is causing political figures and corporations to prioritize the environment and governance. As a result, coalitions are being funded and coordinated to bring together experts on how to propel environmental justice to a global stage.

It is here, from the bottom-up, where we not only have more transparency into environmental pollution levels than ever before, but where we can start to address the larger issue at hand – systemic racism. In this connected world, addressing one issue also indirectly addresses another issue and through environmental sensor data, grassroots advocacy, media, and political pressure, we can hopefully make a more equitable world for all.

Processing…
Success! You're on the list.
Whoops! There was an error and we couldn't process your subscription. Please reload the page and try again.

Briana is on the Product Outreach team at Temboo. She helps industries harness the power of IoT to obtain a greater data insight into their system – be it to enhance their resource management, improve their operational efficiency, or find new areas of growth. She is personally passionate about connecting the human-made world with the natural environment with IoT to create real, long-term sustainability with regards to water quality, energy usage, and circular economy.